I’ve been doing a lot of hand stitching lately, which doesn’t make for particularly enthralling blogging. I’ve been avoiding posting photos in which I’ve made only a tiny bit of progress, but that’s led to a lack of blogging lately.

I probably mentioned before that I’ve switched gears on the hexagon flower quilt. I’ve stopped making hexagon flowers for now while I make a center medallion, and then I’m going to arrange the hexagon bits around that. 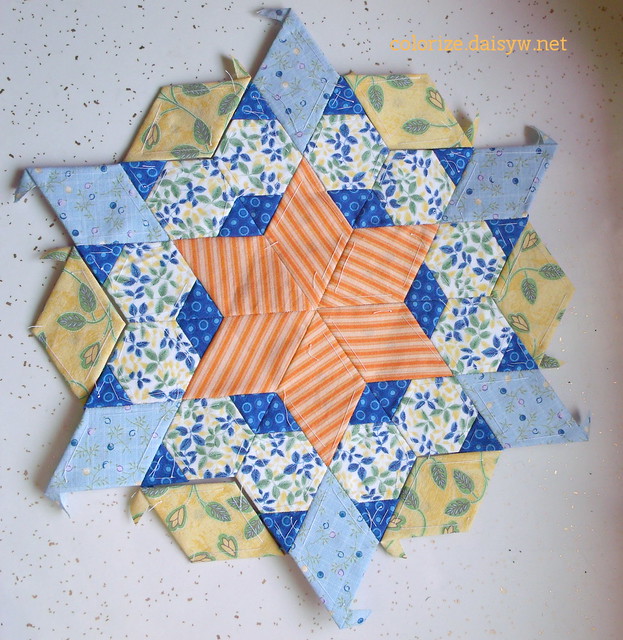 I was completely unprepared for the amount of time it takes to sew all those little 1-inch triangles. It somehow creates a crazy time vortex in which it takes three times as long to sew an inch than it takes to sew a whole bunch of diamonds together. But I love the way they look, so I’m going on with it rather than changing things up to avoid them for the rest of the medallion.

During this part of the project I finally figured out why you’re supposed to pin (or glue) the paper template to the fabric before basting. I never do that with hexagons. I just wrap the fabric around and hold it in place, and they usually don’t slip. Once in a while I might have to re-baste one that moved when I wasn’t paying attention, but it happens so seldom that I couldn’t see my way to doing all the extra work of pinning. 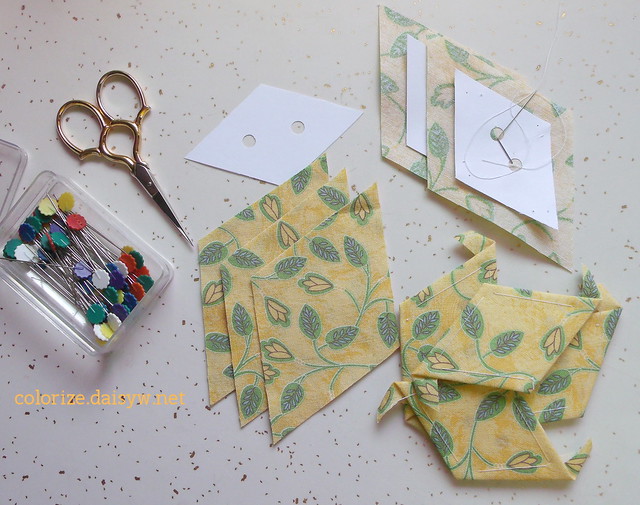 It didn’t take me long to figure out that this approach wasn’t going to fly with the diamonds, though. I’ve been punching holes in the templates to make it quicker to pin. (And yep, I baste right through my templates like a barbarian. I’ve tried basting just on the reverse side, but the templates always pop out on me while I’m sewing, which drives me crazy. The basting threads pull right out when I slide a pin underneath to pull them up.)

The other slow-moving project is an embroidery piece. I drew up a design a little while back: 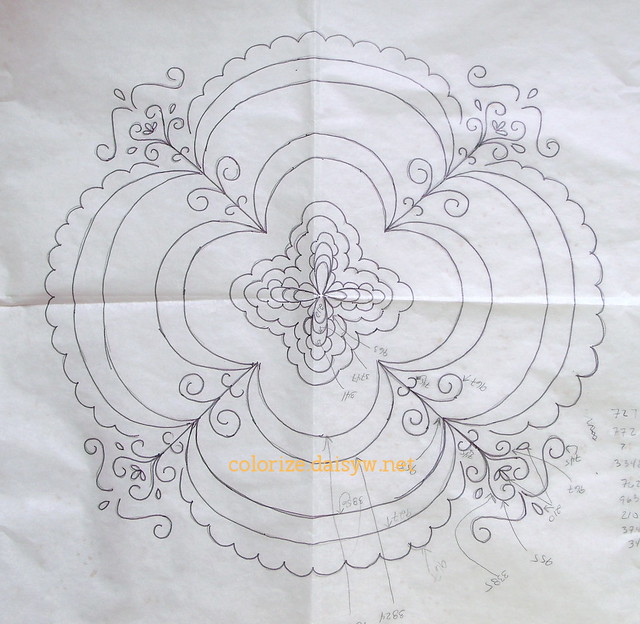 and have been stitching it up slowly. My original sketch had a lot of running stitch and French knots, which I still plan on doing but didn’t make it into the version that I transferred to the fabric. The long arcs are all in Palestrina stitch, which I’d only done once before. I’m getting quicker at it as I go along. I cut the fabric a lot bigger than the design and am planning to quilt around it once I finish the embroidery. I still don’t have a firm plan as to what I intend to do with it, but maybe a sofa pillow. 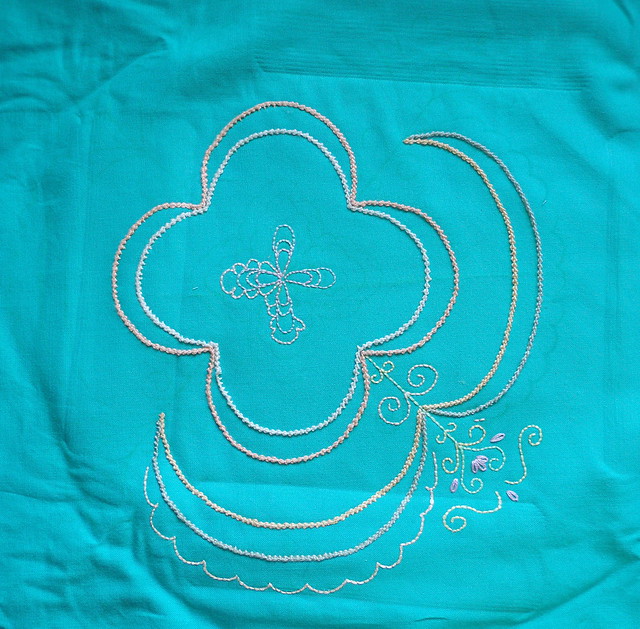 On a side note, am I the only one who has a ton of difficulty with blue water-soluble marker disappearing in humid weather? I keep having to re-mark it as I go along because the lines have mostly disappeared. They’re still there but faint enough that I have to mark them again. It’s happened on other projects recently, not just on this blue fabric, so I don’t think it’s just that it fades enough to be hard to see against the blue. I think it must be humidity that’s doing it.

This thing is really tough to photograph. The fabric is a turquoise-y blue, and the colors came out sort of gray and muddy in the photo. I had to fiddle with the color balance just to get them to look sort of the way they do in person.

I’ve been really into these two projects, but I haven’t touched the sewing machine in a couple of weeks and I miss it. I think I’m probably going to dig up a machine project and work on it this afternoon.