I thought I should maybe get some practice doing free motion quilting before I quilt the sampler, just so the worst of the beginner-y stuff wouldn’t end up on the quilt. I had practiced a little before on scraps, and it went pretty badly. I decided that trying on a Real Project instead might be a good idea, so I armed myself with a copy of First Steps to Free Motion Quilting, which is full of excellent advice, and I decided to try out the large version of this quilted grocery bag holder tutorial from In Color Order. (Which I’ve had bookmarked for ages with the intention of doing something about the deplorable state of excess bag storage in my kitchen.)

The quilting looks very beginner-y with a lot of variation in stitch length, but it went a lot better than I expected it to. 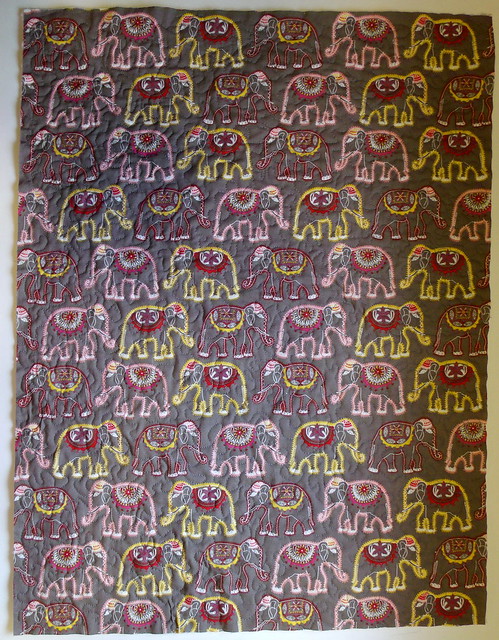 And I’m very happy with the result. I can’t believe how many bags this thing holds. I had a ton of bags crammed into one big plastic sack, and it was a mess and took up so much space. Nearly all of them fit in there — only had to pitch a handful: 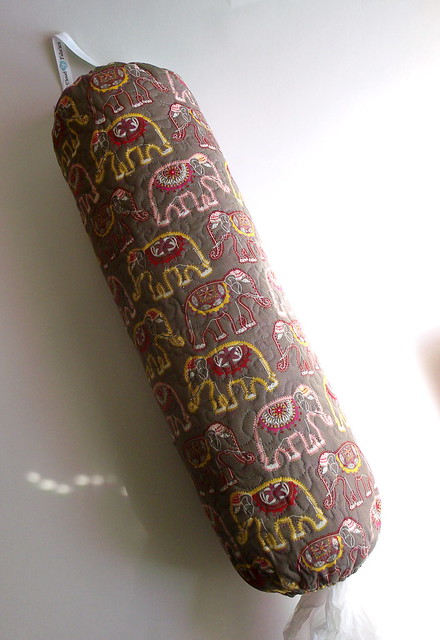 I don’t have a before photo of the gigantic bag full o’ bags, but this looks so much better. 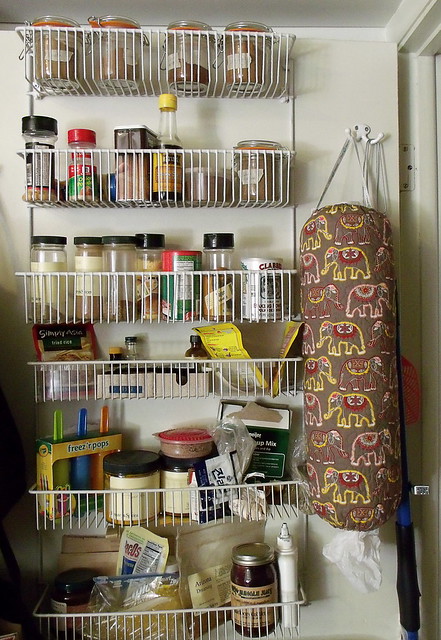 Before working up the nerve to try FMQ, I made this little bag with straight line quilting. The tutorial is from Pink Stitches. I really like the way the batting gives the bag more body. It’s much more substantial and holds its shape better than the ones I’ve made with just interfacing. 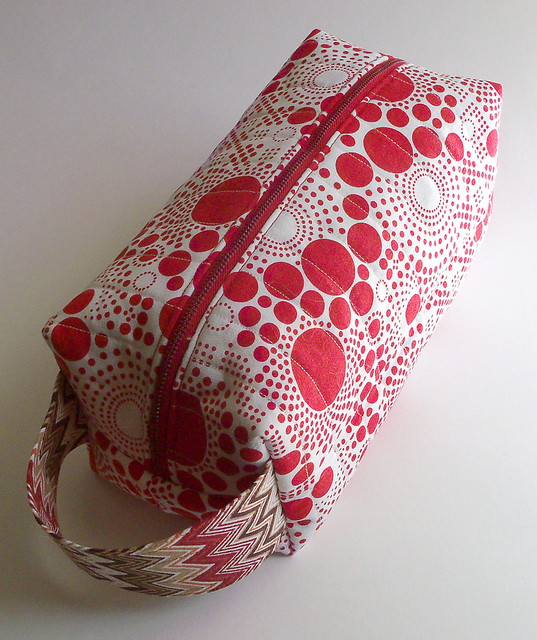 I think I had a bit of failure to follow instructions because I have a little gap at one end of the zipper, but it’s no big deal. The construction of this bag was slightly different than the other ones I’ve made, and I don’t think I read the directions closely enough.

As far as Big Projects go, I’ve got a few going on. The sampler quilt is temporarily stalled until I get some more starch and finish piecing the backing. The hold-up is mainly that I want to try to make my own sizing out of vodka and water. I heard somewhere — I’m thinking maybe on the Hip to be a Square podcast but not sure — that this works best with potato vodka.

I know nothing of vodka except that once when I was fifteen I drank quite a lot of it and spent several hours regretting that decision, so I completely over-researched on the internet and made a list of every brand of potato vodka I could find in order of cheapness, then set out to my local liquor store. It looks like they’re fed up with shoplifting over there because they’ve completely roped off half the store, including the vodka aisle. So there I am in this insanely crowded store, wearing my reading glasses so there’s no chance of seeing any of the actual vodka in the forbidden zone. The tiny bottles at the counter didn’t include any potato-y kinds, and I thought about just buying a bottle of some random non-potato-based vodka. There were about ten people in line, though, so I left because it just shouldn’t be that hard to buy a bottle of vodka. Next time I’m going to try shopping in a better part of town than I live in — maybe then I’ll get to actually look at the bottles in person.

The hexagon flower EPP quilt (otherwise known as the reason I haven’t done any embroidery in over a month) is starting to come along faster. I have 11 of 111 flowers done, which is, um, slightly more than 10%. If you don’t count the infinitely many background hexagons, which of course I’m not going to count until I actually get around to buying the background fabric. (Currently leaning toward a pale gray background but still undecided.) 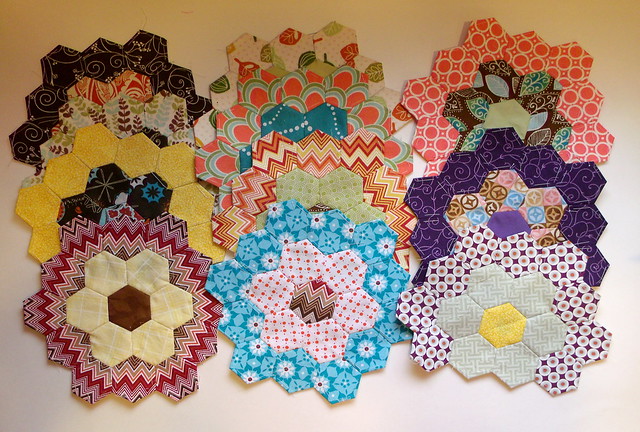 I also finally got the point of doing leaders and enders, so I cut a bunch of scraps into 2.5″ squares and started a disappearing nine patch. I haven’t gotten all that far with it yet — it currently looks like so: 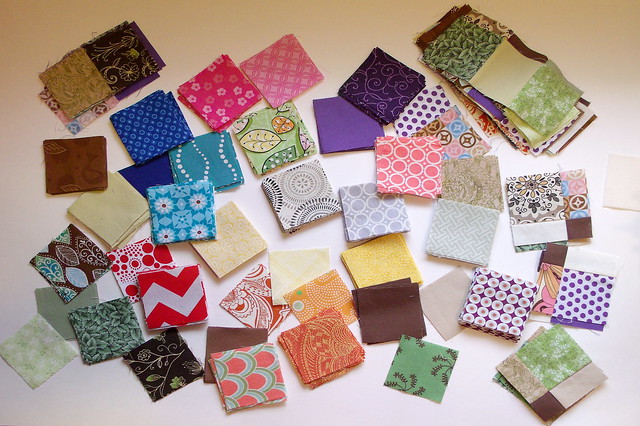 Once the sampler quilt is finished, I’m probably going to start working on it more, not just as a leaders/enders project.

Oh, and I almost forgot — I made another little zipper bag a few weeks ago. My (now former) supervisor at work left recently, and I wanted to make something for her since she’s awesome and I’ll miss her. I used the Sew Spoiled cosmetic bag tutorial from Sew Mama Sew, which was really fun and hardly uses any fabric. 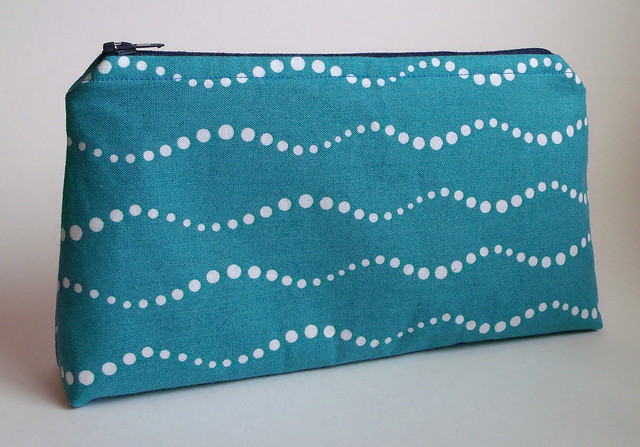