So… two and a half weeks and what do I have to show for myself? Nothing entirely finished, but lots of plans and mostly-finished things.

I've nearly finished the blackwork project. I decided that three repeats looked good, so once I finish outlining and pull out the basting lines it'll be done. I want to hang it on the wall, so I'll need to work that out, too. I figure I'll lace it around some cardstock, and that's where the plan gets a little hazy. I'll work that out when I get there.

The weekend before last, I went to the NQA show, which is held here in Columbus every year. Last year I discovered this about a week after the show, so I was determined not to miss it this year. I had a great time looking at all the quilts. So many amazing quilts. I was a little dazzled by all of it. I took a lot of photos, though I'm not posting any partly because I'm not sure if it's okay to do that and partly because I took the photos on my ipod, which doesn't take especially great pictures.

While I was at the quilt show, I saw a demo by Christine Schultz about piecing hexagons and other shapes that are compatible with them, and it made me completely rethink my hexagon flower quilt. I was planning to use a pretty standard grandmother's flower garden layout, but I've decided instead to do a more complex center medallion and arrange the hexagon flowers around that. Something sort of like this (ignoring the dangling hexagon flower): 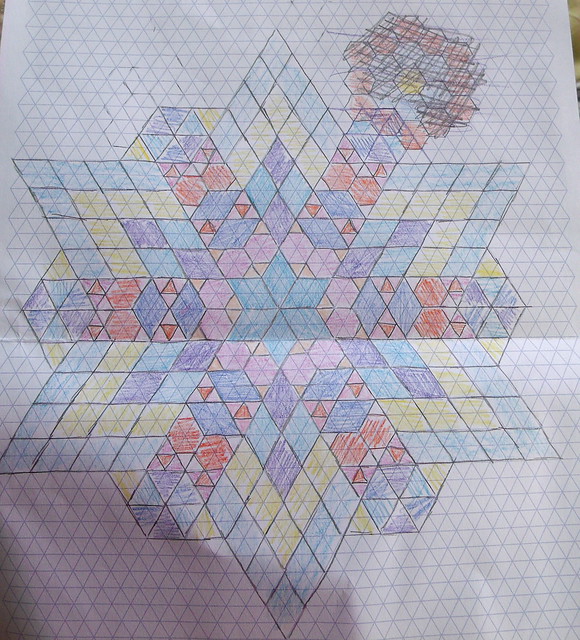 I'm so excited about this. I'd gotten to the point with this quilt where I was starting to think, "Wait, I have how many left to go?" and this has me fired up about working on it again. I wasn't un-excited about it, really, just starting to feel that I wanted to do something different than rows of the same piece, and the demo really transformed how I was thinking about it.

Oh, and that sampler quilt I've been working on since the dawn of time? It's almost a quilt now! I finished the quilting and am hand stitching the binding to the back. Just in time for summer! More about that when I get it entirely finished and get a decent photo of it, but in the meantime, it's looking like this right now: 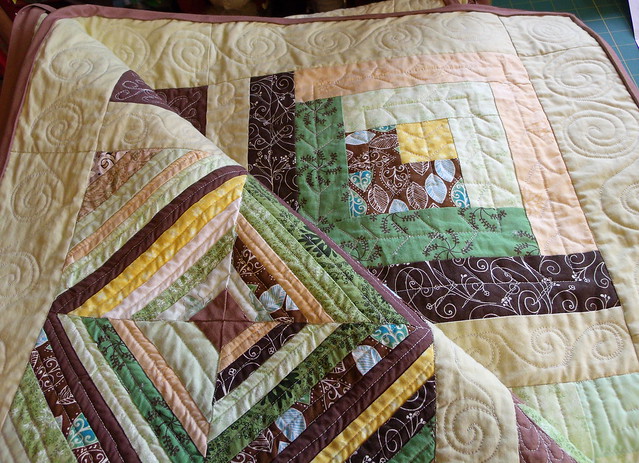